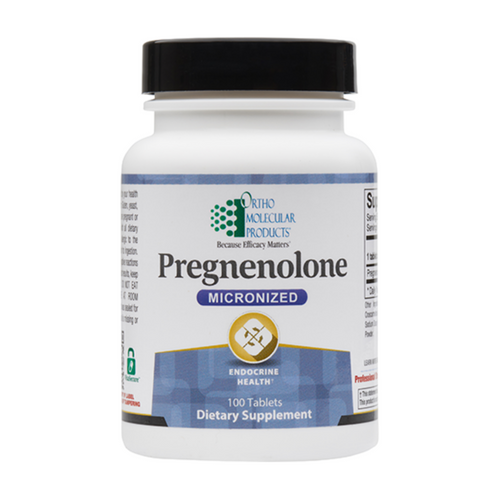 A key precursor to cortisol, DHEA and progesterone, pregnenolone promotes normal adrenal function and supports the stress response system by acting as a hormone precursor.

Pregnenolone is a pro-hormone that is synthesized in the brain and adrenals, but also in the liver, skin, brain, testicles, ovaries and retina. As a biochemical precursor to dehydroepiandrosterone (DHEA) and progesterone, pregnenolone helps to keep a normal balance between these hormones in the body and as a result, helps to modulate the cortisol-driven stress response system, support nerve cell growth and modulate mood.

Pregnenolone plays a key role in hormonal balance as a key precursor to cortisol, DHEA and progesterone, and helps to maintain balance in the body’s stress response system. In addition, pregnenolone has been shown to support a balanced mood and promote cognitive health by modulating the transmission of messages between neurons, influencing learning and memory processes. Since there is strong evidence that pregnenolone levels diminish with advancing age, restoring these levels may also help support overall brain function and sense of well-being. Each serving includes 10 mg of pregnenolone in a scored, quick-dissolve tablet, allowing for incremental dosing as needed.

1 or more tablets per day or as recommended by your health care professional.